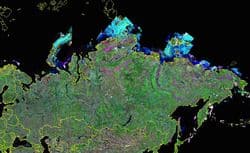 Radio Free Europe reports: "Local reports say Orthodox Christians and other radicals attempted to forcibly break up Russia's first state-approved gay rights march in St. Petersburg. The report said police arrested at least 10 people and that the march was broken off after 40 minutes due to violence."

Hateful protesters, which reportedly included "old ladies and skinheads," shouted and threw eggs at the gay rights advocates and also, after grabbing the rainbow flag out of the hands of the marchers, proceeded to tear it up.

According to the AFP news agency, despite the violence, participants are looking at the positive side of this: "'the fact that this demonstration was authorised is a step forward for us and for all of democratic Russia,' said Maria Efremenkova, one of the organisers. The group was outnumbered by counter-protesters and were guarded by police."

Earlier this year, gay rights organizers held two successful 10-minute "flash" pride parades in Russia, the first time in years that one such march did not end in violence.

Previous Post: « SNL Takes On Rachel Maddow
Next Post: Chairman Of The Joint Chiefs: DADT ‘Belies Us As An Institution’ »