The chairman of the Joint Chiefs of Staff Mike Mullen, who in the past has supported a repeal of "don't ask, don't tell," reiterated his personal feelings on the policy this morning on ABC News' "This Week" with Christiane Amanpour. Mullens refused to comment on the Pentagon survey which is set to be released to the public next week. An excerpt from the transcript from the interview: 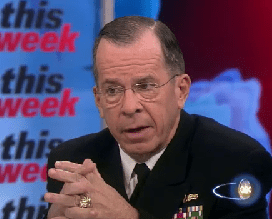 AMANPOUR: You support it, though, repealing "don't
ask/don't tell"?

MULLEN: From my personal perspective, absolutely.

MULLEN: Because I think it — it belies us as an
institution. We value integrity as an institution.

AMANPOUR: You mean forcing them to lie about what
they are?

MULLEN: And then — and then asking individuals to
come in and lie about who they are every day goes counter to who we
are as an institution.

Watch the interview with Amanpour, AFTER THE JUMP. The discussion over DADT begins at the 4:45 mark.

Mullens was busy making the political show rounds this morning. He also popped over at CNN's "State of the Union" where he told Candy Crowley that brand new Marine Commandant Gen. James Amos would have no choice but to move forward with the repeal if it was indeed put into effect.

According to CNN: "Mullen said there was 'no question' that Marine Commandant Gen. James Amos, an opponent of repealing the 'don't ask, don't tell' policy at this time, would implement all necessary changes to allow openly gay Marines to serve if Congress passes a repeal measure. 'He basically said that if this law changes, we are going to implement it, and we are going to implement it better than anybody else,' Mullen said of comments Amos recently made at a townhall-style meeting with Marines."