So, I guess this is the evil counterpoint to yesterday's heartwarming Halloween story about Daphne from Scooby Doo. 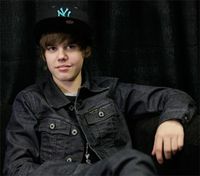 "…police said a boy pulled a knife on his mother who refused to let him go trick-or-treating as a 'gay Justin Bieber,' the singer and teen idol. The 12-year-old boy had been grounded Halloween night after an argument with his mother, who said his costume idea was disrespectful, police spokesman Sgt. Mark Ortega said. After throwing a tantrum and getting grounded from trick-or-treating, he grabbed a knife from his room and threatened to kill her, Ortega said. The mother disarmed her son without injury and called police. Police arrested the pre-teen on suspicion of threatening his mother with a knife."

Only in America. Props to mom for saying no.