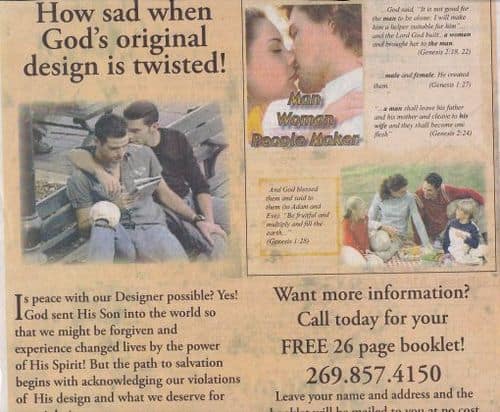 You may remember that, several months ago, Family Research Council and Request Foods took out a full-page ad in Michigan's Holland Sentinel. The ad was a list of lies about gays and lesbians. Looks like another homophobic ad has made its way onto the pages of the newspaper.

The half-page ad features a picture of two men in a casual embrace along with anti-gay biblical quotes and the phrase “How sad when God’s original design is twisted.” It was put together and paid for by a Pastor named Earl Shetler, who also runs a tree removal service in Saugatuck, Michigan, a popular gay and lesbain resort town.