Ian McKellen, who has been out since he was 49, has always had a lot to say about being openly gay in Hollywood. He tells Popeater: 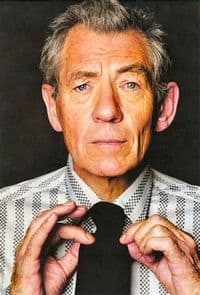 "I don't think any gay person is going to be happy and bring joy to themselves and other people unless they can be honest about their sexuality, and if other people don't like that honestly, that's a comment on them and not on the person who is being honest. That might seem a harsh thing to say to a young actor who is being advised by an agent to stay in the closet. There are no openly gay stars in Hollywood, so someone is telling them to shut up."

He adds: "If you're going around telling a lie you may get by but you won't be half as happy as you would be if you came out. If that means you have to give up hopes of being one of the three or four young sex symbols in Hollywood so be it. You probably weren't going to be one of those anyway. That happens by chance and it doesn't last for very long. There is a difference between living a private life and being in the closet. Being in the closet means you're lying about your life but just because you come out doesn't mean you have to talk about every affair you have. You don't have to talk about what you do in bed anymore than I have to talk about the food I eat."