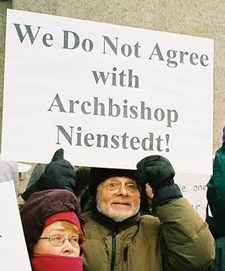 "The student newspaper at the St. Louis Park Catholic school Benilde-St. Margaret was going to include a staff editorial condemning the Archdioceses' anti-gay-marriage DVD mailing. On top of that, the issue would include an essay by senior Sean Simonson about his own recent experience coming out as gay at Benilde-St. Margaret. Editors warned the administration, who didn't stop the publication. The papers were delivered to the school and the website went live Thursday. But by Saturday, school principal Sue Skinner had ordered the two contentious pieces removed."

Skinner released the following statement regarding the censorship:

The administration is asking that the staff editorial entitled “Staff Finds DVD unsubstantiated” , and the opinion piece titled “Life as a Gay Teenager” be immediately removed from the Knight Errant website along with the online comments for each piece.  The reason is that while lively debate and discussion clearly has its place in a Catholic school, this particular discussion is not appropriate because the level of intensity has created an unsafe environment for students.  As importantly, the articles and ensuing online postings have created confusion about Church teaching.  The administration will be following up with the staff of the Knight Errant to review and discuss the protocol for what is appropriate content.

The Minneapolis Post has published the student editorial in full.

"We have been told through this DVD to defend the historical definition of marriage through our votes. Well, up until 1967 it was a historical precedent not to let two people of different races get married in 17 states. In previous centuries, married women were considered their husband’s properties. But these things have changed, and it’s time for the civil definition of marriage to change again to account for our gay brothers and sisters, not in the Church, but at least in the civil arena."

CityPages adds that the student paper is highly regarded: "On Saturday, when the stories were taken down, the paper's faculty adviser and editors were in Kansas City accepting an award at the National High School Journalism Convention, the paper's third national award in three years."

Previous Post: « Palm Center Adds Voice to Those Willing to Support Putting Aside DADT Repeal to Pass Defense Bill
Next Post: Towleroad Guide to the Tube #780 »