More from the Washington Post on the earlier news from the Palm Center, Outserve, and Knights Out that they're willing to support passing a Defense bill that is stripped of the DADT repeal provision. 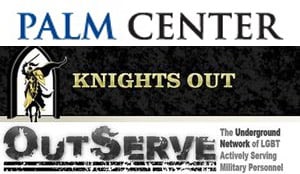 The Palm Center's statement to the WaPo? Their reasoning includes some sort of game of righteous one-upmanship to 'show' McCain:

McCain "has no rationale left, just prejudice," said Palm Center Deputy Director Christopher Neff. "The only rationale left is he's being anti-gay and has chosen to take an anti-gay position to scuttle the defense authorization bill." The groups spoke out in support of passing the authorization bill to demonstrate that unlike McCain, they're willing to put aside personal political priorities in the interest of addressing national security concerns in the bill, he said.

It's a risky political calculation that puts them in direct conflict with four larger groups more directly involved with lobbying efforts to end the ban: the Human Rights Campaign, the Center for American Progress, Servicemembers United and Servicemembers Legal Defense Network.

"It has been the position of the organizations that actually work on repealing 'don't ask, don't tell' to strongly oppose stripping the repeal language out of the defense authorization bill," Nicholson said in an e-mail. "That position has been based on the reality of the vote count, and those facts on the ground here in Washington have not changed."

More to come on this as it develops…