The guideline changes in the handbook will be announced today during a large get-together of Mormon leaders. The Salt Lake Tribune reports: 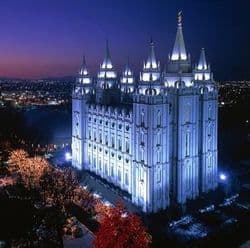 The book, known as the Church Handbook of Instructions, lays out Mormon policies on everything from baptism to running a worship service to counseling troubled marriages.

The updated reference book, scheduled to be presented to thousands of Mormon leaders in a giant televised training session Saturday, will set the tone for church interactions for years to come.

The new handbook makes a clear distinction between same-sex orientation and behavior. It eliminates the suggestion, mentioned in a 2006 edition, that same-sex relationships "distort loving relationships" and that gays should repent of their "homosexual thoughts or feelings."

It also says that celibate gay Mormons who are "worthy and qualified in every other way" should be allowed to have "callings," or church assignments, and to participate fully in temple rituals.

The handbook simply repeats what top LDS leaders have been trying to say, but in more explicit terms that many members will understand, said David Pruden, president of Evergreen International, a support group that helps gay Mormons live by church standards.

Joanna Brooks of the website Religion Dispatches looks at the impact of the changes: "The new CHI does not offer institutional welcome or affirmation to LGBT people who want to live full lives as LGBT people. It maintains that 'homosexual behavior' is sinful. It does not create space for LGBT Mormons to attend church on Sunday with their partners, as I am able to do. But it does show institutional LDS movement on LGBT issues, most crucially—one hopes—for LDS LGBT young people who may have been brought up to despise themselves simply for having homosexual thoughts and feelings."

The changes in the guidelines are a start, but a very small one. You may remember that just last month the president of the Quorum of the Twelve Apostles of The Church of Jesus Christ of Latter-day Saints, Boyd K. Packer, reiterated the church's anti-gay stance by declaring that "to enter into any relationship that is not in harmony with the principles of the Gospel must be wrong."