Cher finds Christina/Ali annoying (I know the feeling) but reluctantly hires her. Metrosexual bartender Jack (Cam Gigandet) finds Ali sexy and invites her to sleep on his couch. Queen bee Nikki (Kristen Bell) finds Ali threatening and things turn sour between them immediately though you might find it absolutely jarring to hear Christina Aguilera of all people diss another woman for looking like a drag queen. Just sayin'. Cher’s right hand man Sean (Stanley Tucci) finds Ali interesting and opts to pretend that Christina Aguilera is Anne Hathaway, playfully recreating his entire Devil Wears Prada performance. (What? You loved it the first time.) Alan Cumming playfully recreates his Cabaret emcee performance (also, still great) but the movie barely notices. The club has a new star and things are looking up. Or are they? Unfortunately, a vulture (Eric Dane) is circling both “Burlesque” the club, still having financial problems, and Ali who is having ‘fresh meat’ problems as the new girl with the giant breasts/voice.

At times Burlesque plays almost exactly like a well choreographed flashy long form Christina Aguilera music video but for those who aren’t particularly drawn to her, Cher is a genius counterprogramming buffer. Aguilera’s voice has always favored the charm offensive, as if every note of each song is the climax or a new opportunity to demand fan submission but Cher merely warbles within her limited range knowing full well that she already has your full attention. Cher’s opening number “Welcome to Burlesque” provides brilliant meta-commentary.

Writer/director Antin unfortunately misses a huge dramatic opportunity in the reveal of Ali’s giant sized voice, which comes about half an hour into the movie. The moment is meant to be an astonishment to everyone from Burlesque patrons to the club managers while providing a smart wink to the moviegoing audience (who are ahead of the game, being familiar with Christina's pipes). But Antin spoils it by having Christina sing twice before the reveal, once to herself as the movie begins and once in a stupid fantasy sequence that’s a direct lift from Roxy’s “All That Jazz” interruption in Chicago (2002). There's already too little of Kristen Bell in the movie, and then they have to take her big number away from her and give it to Christina? Dirrty. 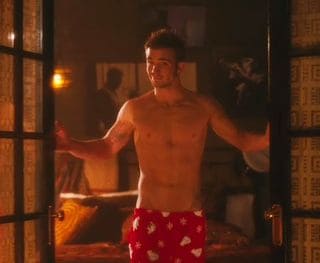 The movie is riddled with derivative problems like this, but in our current post-everything mash-up culture, this weakness can work as an interactive strength. Before Ali becomes a showgirl, for example, she’s a cocktail server prone to performing the dance steps while serving and all of these little cutaways scream Nomi Malone discovering “Goddess” for the first time in Las Vegas. If you can’t smile when reminded of Showgirls (1995), I weep for you. Perhaps Burlesque shouldn’t work but from the big budget presentation of its frequent musical numbers to the banter between the characters, it finds ways to be entertain. It helps to have actors as fun and confident as Cher and Tucci and Bell in any movie’s corner. But, shockingly, even Cam Gigandet, whose body has always dwarfed his acting ability, finds a way to make Jack endearing during an improbably cute snacky seduction scene in his kitchen. That he’s most endearing while completely naked is perhaps no coincidence. If the sales of Famous Amos cookies skyrocket post Burlesque, Cam is to blame.

The movie's biggest misstep, if you excuse all the shameless borrowing from superior films, is how soggy it gets, weirdly diluting its own bitchiest moments. The ladies from Showgirls and Chicago, this movie's twin revered towers, never worried about their likeability and we liked them more for it. They’d eat Ali and Nikki alive. Embrace the bitchy, Antin! It’s a show queen movie, for Nomi’s sake. 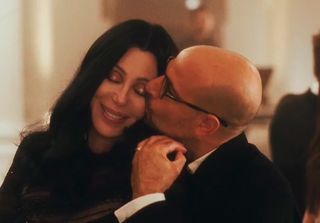 After the all-media screening I mostly heard “disaster” comments and one critic, shocked that anyone (like myself) enjoyed it, lost it. ‘Crossroads is a masterpiece in comparison,' he say. 'This was pure torture.' Clearly time heals all wounds or this critic has never been waterboarded. Christina Aguilera is never going to win an Oscar but by virtue of her total mediocrity as an actress she is instantly eliminated from the Most Wooden Pop Diva wars. (That title has to go to Mariah in Glitter or Kelly Clarkson in From Justin to Kelly, right?). It may sadden the perverse reader that Burlesque is too competent for the Bad Movie We Love sweepstakes and perhaps it’s a must-avoid if neither of the two divas do it for you. But if you love Cher and/or Christina, it’s a must-see and an obvious future member of the Movie You Always End Up Watching When Channel Surfing Club.

ALSO OPENING
Jake Gyllenhaal and Anne Hathaway get naked and battle Parkinsons in LOVE AND OTHER DRUGS. The haunting gay romance UNDERTOW (Peru’s Oscar submission, also known as CONTRACORRIENTE) is opening in select cities this weekend. It’s well worth a look. I spoke to its debut director, out filmmaker Javier Fuentes-Leon this week, and I’ll share some of that conversation next week. See it! It has some stiff competition for the foreign film Oscar nomination but it’s a moving gay romance so cross your fingers. The Oscars could stand to be a little gayer (he said ironically). And, finally, the ad campaign for TANGLED, Disney’s latest animated musical, promised a snarky Shrek/Hoodwinked style twisted fairytale. It lied (thank God). This musical version of Rapunzel is an admirable sweet return to classic Disney fairytale form. You can add Mother Gothel (voiced by Broadway’s ever brilliant Donna Murphy) to the list of Disney’s best screen villains. But skip the 3D. You'll save money and you won't miss a thing. 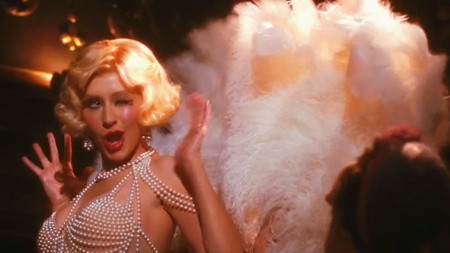 YOUR FEATURE PRESENTATION
Happy Thanksgiving to all you Towleroad Readers. Care for some turkey? Cher, XTina and gay filmmaker Steve Antin shall provide a succulent bird. If you’ve been looking forward to the new musical BURLESQUE, relax. I come not to disparage the movie, but to (mostly) praise it. Consider this a corrective protest. It will prove too easy a target for critics and haters, who often seem to despise girlie or flashy movies before they’ve even seen them, but it’s not truly a turkey. It’s more like a (hot) pink flamingo; the plumage is so colorful, you forget that it looks like it should fall over.

The basic plot of Burlesque is so typical as to be personality free: small town dreamer arrives in big city to make it big. Does. The End. But let’s backtrack. Christina Aguilera, referred to as “Ali” since she’s acting or “Iowa” since she’s just off the bus, chances upon the club “Burlesque” run by Cher. For some reason everyone in the movie keeps calling Cher “Tess" but even Cher knows she’s just playing Cher. Tess even gets an 11th hour power ballad "You Haven't Seen the Last of Me Yet" to remind you that she's Cher. But no matter. Cher plays herself so superbly she reconfirms her status as the best actress pop music ever produced. 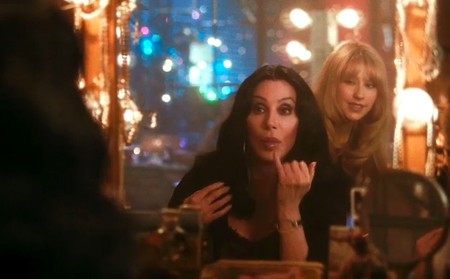