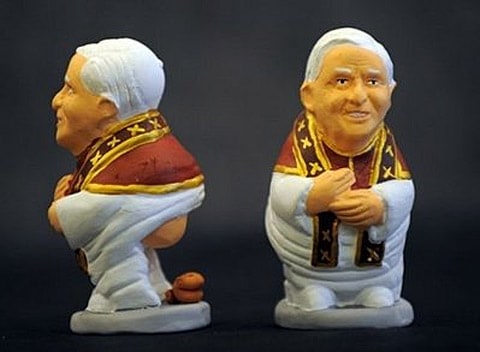 Pope Benedict has been caught with his pants down in an annual Catalonian holiday tradition — Caganers, small statues which depict celebrities and public figures defecating.

"As in previous years, the personalities with the highest media profiles are generally the best sellers. Last year, US President Barack Obama and France's first lady Carla Bruni-Sarkozy were among the top stars. This year, Barcelona's Argentine footballer Messi, who won the Golden Boot award as last season's top scorer in Europe's domestic leagues, is expected to be big, said Marc Alos, a member of the Alos-Pla family which produces the hand-painted figurines at its factory near Barcelona. For children, Messi, whose caganer has just been reissued, will be competing with popular television cartoon character SpongeBob SquarePants, a newcomer this year. 'Michael Jackson will be also be highly sought after this year,' as will the pope, who visited Spain this month, said Alos. Other new figurines include the Dalai Lama, Real Madrid coach Jose Mourinho and Formula One driver Fernando Alonso in his new Ferrari colours."