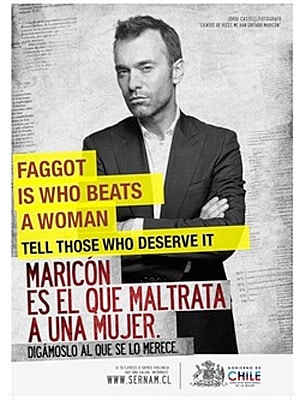 A new campaign raising awareness about violence against women is a big FAIL.

Chile's Minister of the National Women's Service, Carol Schmidt Zaldivar, is pushing a campaign with the tagline (translated) "Faggot is he who beats a woman".

The campaign has the support of all the recently-rescued Chilean miners, who are apparently wearing T-shirts with the campaign's tagline.

The Minister, for her part, said that she's thrilled to have the backing of the miners, and hopes that the campaign can truly make a dent in preventing gender-based violence. "[This campaign is] an example of unity and consensus that we as a country want to eradicate domestic violence in Chilean homes," she said.

But by calling men who perpetrate acts of violence against women "Faggots," isn't this campaign just replacing one act of violence with another? Sure seems so, and that's the message coming from a number of LGBT groups in the country who are urging the Chilean government to drop the campaign.

The group Soy Hombre Soy Mujer released a press release late last week, saying that this campaign is only going to increase homophobia and anti-gay sentiment in Chile, where statistics show a nearly 600% increase in recent years of violence toward the LGBT community.

Change.org has posted the petition from Soy Hombre Soy Mujer.