Now that credible groups are finally seeing the Family Research Council and other anti-gay extremists entities for what they are really are — hate groups — the wheels are starting to come off.

Tony Perkins of the FRC reacted to his group's designation by the Southern Poverty Law Center as a "hate group" with a statement on Wednesday claiming they are the victims of a smear campaign and demanding an apology. 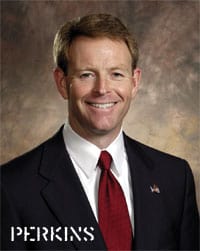 "Family Research Council has, for nearly 30 years, advanced faith, family, and freedom in public discourse. We do so with civility and compassion. We hold to the indisputable fact that the family – a Dad, a Mom, and children – is the best building block of a good society, which is why we oppose efforts to transform it based on personal sexual preference.

"The Southern Poverty Law Center is a massively funded liberal organization that operates under a veneer of public justice when, in fact, they seem more interested in fundraising ploys than fighting wrongdoing.

"This is a deliberately timed smear campaign by the SPLC.  The Left is losing the debate over ideas and the direction of public policy so all that is left for them is character assassination.  It's a sad day in America when we can not, with integrity, have a legitimate discussion over policy issues that are being considered by Congress, legislatures, and the courts without resorting to juvenile tactics of name calling.

"The Left's smear campaigns of conservatives is also being driven by the clear evidence that the American public is losing patience with their radical policy agenda as seen in the recent election and in the fact that every state, currently more than thirty, that has had the opportunity to defend the natural definition of marriage has done so.  Earlier this month, voters in Iowa sent a powerful message when they removed three Supreme Court justices who imposed same-sex marriage on the state.  Would the SPLC also smear the good people of Iowa?

"Family Research Council will continue to champion marriage and family as the foundation of our society and will not acquiesce to those seeking to silence the Judeo-Christian views held by millions of Americans.  We call on the Southern Poverty Law Center to apologize for this slanderous attack and attempted character assassination."

NOM's Brian Brown sprang to his group's and Perkins' defense in the Washington Post:

"This is about protecting marriage. This isn't about being anti-anyone. The whole idea that somehow those folks who stand up for traditional marriage, like the Family Research Council, are hateful is wrong. [The law center is] trying to marginalize and intimidate folks for standing up for marriage and also trying to equate them somehow to the KKK."

With supporters like THESE, why would anyone in their right mind believe Brown?

Previous Post: « Dolly Parton: ‘We Need to Accept People for Who They Are’
Next Post: Watch: Kanye West, Kylie Perform in Macy’s Thanksgiving Parade »