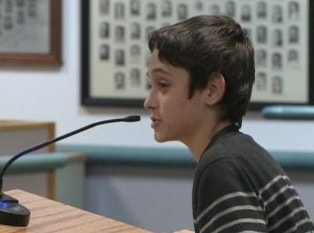 14-year-old student Graeme Taylor, who is openly gay, bravely stood up for Ann Arbor teacher, Jay McDowell at a recent school board meeting. McDowell was disciplined on October 20 for removing two students who had made anti-gay remarks in class. During his speech in support of his teacher, Taylor revealed his problems with bullying and even talked about a suicide attempt at the age of nine.