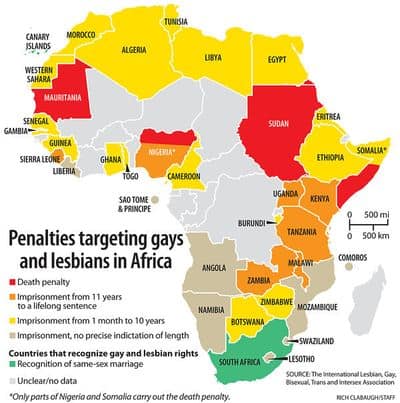 The Washington Post has published an article today on the recent increase in anti-gay sentiments and horrific violent crimes against gays and lesbians all across Africa. 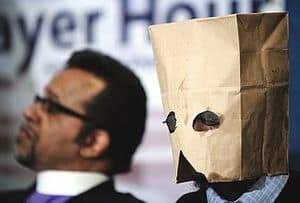 "'It has never been harder for gays and lesbians on the continent,' said Monica Mbaru, Africa coordinator for the International Gay and Lesbian Human Rights Commission, based in Cape Town. 'Homophobia is on the rise.'"

So what's the reason for the increase?

"The growing tide of homophobia comes at a time when gays in Africa are expressing themselves more openly, prompting greater media attention and debates about homosexuality. The rapid growth of Islam and evangelical forms of Christianity, both espousing conservative views on family values and marriage, have persuaded many Africans that homosexuality should not be tolerated in their societies."

American gay rights advocates are helping one side but American anti-gay Christians are helping the other, especially when it comes to Uganda's "kill the gays" bill:

"American gay activists have sent money to help the community here. Western governments – including aid donors – have vocally criticized the bill and denounced the treatment of gays. That has angered conservative pastors here, many of whom are influenced by American anti-gay Christian groups and politicians who say that African values are under attack by Western attitudes. They say their goal is to change the sexual behavior of gays, not to physically harm them."

"'In Uganda, we look at homosexuality as an abomination. It is not normal,' said Nsaba Butoro, Uganda's minister on ethics and integrity and a vocal supporter of the bill. 'You are talking about a clash of cultures. The question is: Which culture is superior, the African one or the Western one?'"

An update on the African tabloid named Rolling Stone which published the names and addresses and called for the hanging of people it claimed are gay: Gay rights activists "have taken Rolling Stone to court, seeking to stop it from publishing more anti-gay articles. In a packed courtroom last month, their attorney argued that the stories violated constitutional rights of privacy, dignity and right to life."

As the piece points out, homosexuality is illegal in more two-thirds of African. As a refresher, check out how these laws appear on a map of the continent, AFTER THE JUMP.