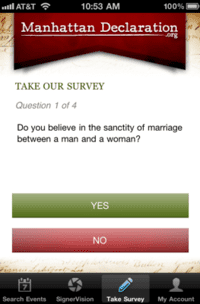 Originally rejected in late November to loud protest from the wingnuts, the anti-gay Manhattan Declaration app has again been rejected by Apple's app store, GLAAD reports:

"Apple rejected the second submission on the same grounds as the first, noting that the app is likely “to expose a group to harm” and “to be objectionable and potentially harmful to others.” The Manhattan Declaration website posted a statement on December 23 announcing Apple’s rejection of the app, and the makers of the content plan to take the issue to the Apple’s App Review Board after the holidays. Media coverage of this second rejection does not seem to have been picked up by many conservative outlets as of yet."

Wrote Steve Pep last month: "Back in October, Apple approved an app called The Manhattan Declaration in which users were asked survey questions about same-sex marriage, abortion and gay relationships. The app was, of course, put out by those who issued the manifesto in 2009, so if your answers did not mesh with their own hateful points of view, you scored very low in the survey. In their eyes, or in this case the 'eyes' of the app, the only correct answers are the ones found in The Manhattan Declaration."