More on Ebert's journal including an email exchange with the filmmaker asking him how he did it. 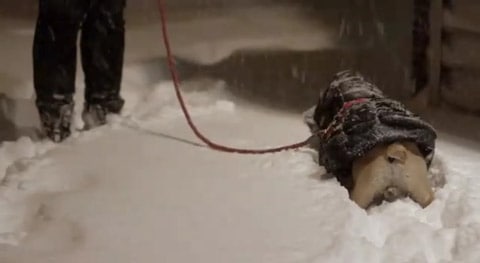 Writes Ebert of Jamie Stuart's Man in a Blizzard:

This film deserves to win the Academy Award for best live-action short subject. (1) Because of its wonderful quality. (2) Because of its role as homage. It is directly inspired by Dziga Vertov's 1929 silent classic "Man With a Movie Camera." (3) Because it represents an almost unbelievable technical proficiency. It was filmed during the New York blizzard of Dec. 26, and Jamie Stuart e-mailed it to me with this time stamp: December 27, 2010 4:18:18 PM CST.

You can tell from the cinematography he knew exactly what he was doing and how to do it. He held the Vertov film in memory. Stuart must already been thinking of how he would do the edit and sound. Any professional will tell you the talent exhibited here is extraordinary.

Watch the short film, AFTER THE JUMP…