In an interview with The Advocate's Brandon Voss, Mariah Carey says there is no truth to the rumors that she's bisexual: 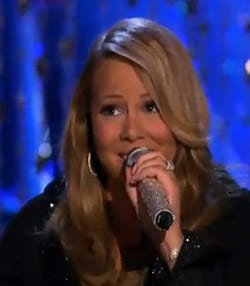 "If it makes somebody happy to say that, then whatever, but that’s not the reality. I don’t have a discriminatory policy of who I’m friends with, so yes, I’m friends with women who are gay — gay, straight, it doesn’t matter to me. So I don’t get upset when I hear that, because it is what it is. I guess I could lie about it to seem more exciting."

She also offers a reason why artists like Lady Gaga, Christina Aguilera, Katy Perry, Nicki Minaj, and Ke$ha might use bisexuality in their lyrics and videos:

"Maybe it’s more a reflection of society becoming more accepting. Some of those different artists might really be expressing themselves, but yes, some might just be looking for a little more attention. You never know."

"If two people want to get married, it’s their prerogative — we hope. Everybody should be able to do what they want to do and be in the pursuit of happiness. Ever since I was a little girl, my mother was very open-minded and had many different types of friends, so being gay never seemed wrong or strange to me. Her best friends were a gay couple, Ernie and Mort, and they kind of co-raised me. They were the nicest guys ever, and they would watch my little shows when I’d sing. Today, I guess they’d be called my guncles. Sometimes they’d put us up when we didn’t have a place to go. I couldn’t wait to go stay at their house because it was so beautifully done…One of them passed away. They weren’t together at the very end, but they were together for a long, long time."

Carey's Christmas special aired last night. Check out her renditions of "O Come All Ye Faithful" (with her mom) and "A Charlie Brown Christmas", AFTER THE JUMP…

Previous Post: « House Expected to Vote Tomorrow on Bill to Repeal ‘DADT’
Next Post: Watch: The Movies of 2010 in 6 Minutes »