Or something like that, writes the NYT, in the made-up trend story of the week: 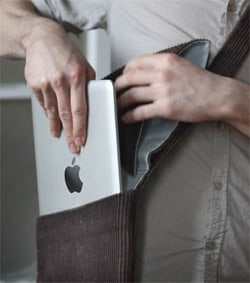 Call it the male iPad dilemma: too large to slip into a pants pocket, too stiff to be curled up like a magazine and too precious to leave unprotected. With its rigid tablet shape, Apple’s iPad has raised an awkward consideration for many men: how to carry it in a manner that is practical and yet, well, masculine.

But guys who want to lug around their iPads are finding themselves quietly reaching for a so-called man purse, or murse. The iPad-shaped bags seem to be the gadgetphile’s equivalent of a woman’s clutch…But even the most fashionable iPad bag can be mistaken for a murse. Some men are so stymied by the iPad’s shape that they have avoided buying one. 'How do you carry it?' asked Keith Nowak, a 27-year-old entrepreneur in New York City. 'It’s this weird in-limbo device. It’s why I haven’t gotten one: I don’t know what I would do with it.' But he still wrestles with iPad envy. 'It’s supercool, and I want one,' he said.

Previous Post: « Watch: What’s the Biggest Threat to Free Speech?
Next Post: Lieberman on ‘DADT’ Repeal: ‘The Chances are Really Good. The Moment for This Has Come’ »