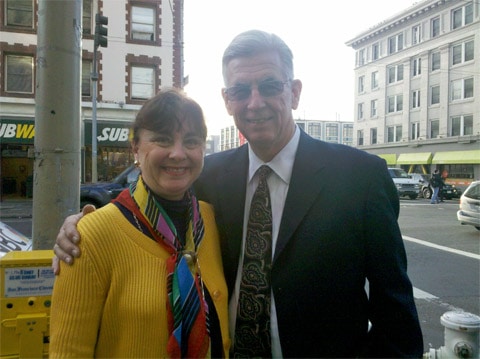 Dr. Jennifer Roback Morse of the NOM-Affiliated Ruth Institute, is trying to get the rainbow back from gays. She says:

"Proposition 8 was passed by a great grassroots coalition that included people from all across the religious traditions, and also people of every race and color," Morse recognizes. "We are the real rainbow coalition. The gay lobby does not own the rainbow."

She tells OneNewsNow that she wore a rainbow-colored scarf to the Ninth U.S. Circuit Court of Appeals hearing on Proposition 8 as a statement to signify that supporters of traditional marriage still own the symbol.

"We can't simply let that go by. Families put rainbows in their children's nurseries. Little Christian preschools will have rainbows…Noah's Ark and all the animals…. Those are great Christian symbols, great Jewish symbols," the Ruth Institute president points out.

I agree with Dan Savage, who writes: "Let's make a deal: give us our full civil equality—repeal DOMA, let us marry legally in all fifty states, end DADT, pass ENDA, stop torturing gay kids to death—and we'll let you have your f**king rainbows back."

I managed to track down a photo of Morse standing outside the courtroom on December 6 and as you can see, her "rainbow scarf" is a major FAIL. Sorry lady, that doesn't look like any rainbow flag I've ever seen. If you really want to throw down you're going to have to get more Gilbert Baker than that.