We have questions surrounding the repeal of DADT, not the least of which is how open service will affect the rights and benefits of "unioned" gay service members. Much of the complications above — where they are married, marriage versus civil unions, where they are posted — do not matter. The military is part of and subject to federal law when it comes to benefits. So, federal benefits that inure to a married couple are given to couples legally married where one or both service in the military. Those couples may receive benefits from the state in which they live, but they receive those state benefits by virture of their state residence, not by dint of their enlistment.

The fact that someone is "domestically partnered" or "civilly unioned" does not matter, just like it does not matter for those civilian couples who want federal benefits pursuant to these unions, but cannot get them. As we know from the recent DOMA cases — Gill v. OPM, Massachusetts v. HHS and the more recent cases filed by Lambda Legal and the ACLU – many of the benefits the plaintiff couples want are contingent on marriage, which makes them, as married couples, "similarly situated, but differently treated" under the law. The cases would not be the same if the couples were unioned, but not married.

But, the military could institute a benefits policy that extends certain benefits to non-married, but unioned couples. It could not grant all benefits; some  are incumbent upon marriage pursuant to statute. Then again, military retirement works quite differently, with health care, pension, death benefits coming from separate statutory schemes. Any benefit extension would be a privilege over and above those granted to civilian folks, but our service men and women have certain rights and privileges that civilians do not, anyway. The executive branch could sign off on this benefits policy, but an act of Congress — say, a future Defense Reauthorization Bill — could overturn a hypothetical executive order granting some federal benefits to non-married, but "unioned" gay service members. Note that this is all very hypothetical; more possible for the purposes of this discussion, rather then likely under this political climate.

That someone is married in Iowa, but is stationed in Nevada does not matter for the same reason as above — military benefits are federal benefits, denied to gay couples not by dint of where they live, but because of their sexual orientation or the sex of the person they love and married.

So, my conclusion is that there seem to be a lot of questions with simple answers. DADT's repeal does not force the military to give benefits to same-sex married couples. Quite the contrary, DADT's repeal is a step short of full equality because DOMA prevents the military from extending those benefits. The end of DADT simply allows those of us who are openly gay to serve honestly and serve our country with integrity and not hide who we are. Open service does not require the military to recognize its gay relationships any more than, say, Iowa's marriage law requires the federal government to recognize Iowa's gay relationships. According to the US military now, gay service members exist and their intimate behavior is no longer illegal; whether they are married is another matter.

You know what this means, right? On to the next, I say.

This is the first in a series of posts about implications of the repeal of "Don't Ask, Don't Tell" on other areas of law. Today, we discuss marriage equality and marriage benefits. In future posts, we will discuss military criminal justice, international law and deployment and other areas you may not have considered at first glance. 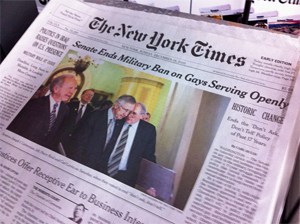 My thesis for today is that DADT repeal is a limited victory (but a great victory nonetheless!) for ultimate and full equality given that the Defense of Marriage Act (DOMA) prevents the military from treating the military's gay couples the same as its straight couples.

Let's assume we are in a world where DADT is officially gone — it has been certified by Secretary Gates and others, President Obama has signed the order and the military's orderly implementation of open service is complete. We are a fully integrated force.

To even begin to answer questions — and in some cases, we will have more questions than answers — about marriage and benefits, we have to make another assumption. Let's assume that our fully inetgrated military exists in a world where marriage law with respect to gays and lesbians is the same as it is today, that is, there are only a few states that allow gays to marry, many more allow gays to enter into domestic partnerships or civil unions, even more have state bans on gay entry into the institution of marriage and the federal government still does not recognize any marriages between gays and DOMA is still on the books. We have to assume this in order to have a basis for our conclusions; otherwise, we're just guessing.

Here are a few questions: Will same sex partners receive benefits as partners of service members? Does it matter where they are stationed? Is DADT repeal in conflict with DOMA? If a service member marries her partner in Connecticut (a marriage equality state), is she treated any differently in terms of benefits, health care, salary, day care and so on, than a service member who is in a civil union with his boyfriend in New Jersey? Does it matter if either of them are stationed in marriage equality states?

A discussion of why, under our assumptions, this is all quite simple (but no less unfortunate) AFTER THE JUMP…