"Here at home our court system has become an engine of secular dictation driving God out of public life and shattering the very fabric of more than two thousand years of religious commitments in our social policies," Gingrich insisted, in a not-so-subtle reference to gay rights.

It's no surprise, then, that Gingrich described Judge Vaughn Walker's decision to overturn Proposition 8 as "an outrageous disrespect for our Constitution and for the majority of people of the United States who believe marriage is the union of husband and wife."

In his interview today, Gingrich called winning the Republican primary "an enormous challenge," and, when asked to compare himself to some other alleged hopefuls, he replied, "Structurally, Romney’s the front runner, and in popularity, probably Huckabee’s the front runner, [and] Palin is a phenomenon in her own right."

He then went to say the press and pundits should consider potential candidacies from Mitch Daniels, Tim Pawlenty and other traditional social conservatives. Putting himself "somewhere in that bunch," Gingrich called his candidacy as "competitive."

Reading through Gingrich's recent speeches and statements, however, I would say the only true competition he faces is making sure his tried, true and stale brand of social conservatism resonates louder than other contenders, because this sounds like the same anthem we've been hearing from the right since Gingrich was elected House Speaker way back in 1994. 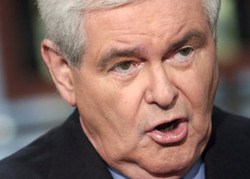 Like most of the Republican Party's potential presidential contenders, Newt Gingrich refuses to say definitively whether he plans to run for the White House, but the former Speaker of the House did tell Fox News' Chris Wallace today that he's "more inclined to run than not run."

"[My wife] and I will make a decision probably at the end of February, beginning of March," explained Gingrich. "I think we’re much more inclined to run than not run and I think everything we’ve done over the last year, talking to friends, thinking things through, has made us more inclined to believe that it’s doable."

The "things" done over the past year include shoring up support from the religious right, like an audience at Liberty University, the school founded by Evangelical leader Jerry Falwell, where last month Gingrich warned that "secular socialists" are taking down our nation.

"In the name of religious liberty secular socialists destroy religion," said Gingrich of America today, which he compares to Nazi-occupied Poland, "Our American Civilization will only survive if we have the courage to stand firmly for the truth and to oppose those who would radically undermine and destroy our values, our freedoms, and our very way of life whether they are radical secularists or radical Islamists."

Gingrich made comparable remarks last year, telling, again, Fox News, "There is a gay and secular fascism in this country that wants to impose its will on the rest of us, is prepared to use violence, to use harassment. I think it is prepared to use the government if it can get control of it."

Meanwhile, the Republican's Liberty University speech also took a shot at our nation's judicial system, and he sounded eerily similar to assertions made by his conservative counterparts.