Anne Hathaway is getting her long-hoped-for role on Glee: 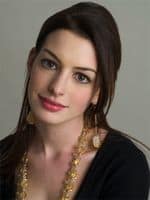 "We just finalized a deal with Anne tonight to come onto the show," creator Ryan Murphy told PEOPLE on Sunday at the Golden Globe Awards, where Glee was named best comedy or musical for the second straight year.

"She's already created [her role]," Murphy said. "She wants to play the lesbian aunt of Chris Colfer. Because everyone needs a lesbian aunt."

Hathaway, 28, isn't the only star to seek a guest spot on the show. Plenty of others pitched Murphy on Sunday. "They always do," he said. "I can't even think of who. But it's so sweet. I think they support the show because it's about the arts."

If you missed Chris Colfer's Golden Globe acceptance speech in which he speaks out against bullies, check it out here.