A flurry of documents were posted to the Ninth Circuit Court of Appeals website late this morning regarding the federal challenge to Proposition 8. 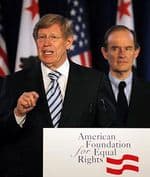 The most significant news is that the Ninth Circuit has asked the California Supreme Court to look at the standing of proponents of Proposition 8 (Protect Marriage, etc) with regard to their right to defend it.

The other party seeking standing, California's Imperial County, was denied.

The move delays federal resolution of the issue.

HERE'S SOME ANALYSIS AND BETTER EXPLANATION FROM OUR LEGAL EXPERT ARI EZRA WALDMAN:

Today, the Prop 8 case out in California took two baby steps in a long legal journey. First, the Ninth Circuit denied standing to Imperial County. Second, "certified a question" to the California Supreme Court, asking for some guidance on whether there is any state law that allows initiative proponents to defend their ballot measure in court when the state refuses.

This seems confusing, but let's break this down. I think you will see that taking the certification step was a prudent — though, in many legal scholars' opinions, including my own, unnecessary — step to take.

First, the Ninth Circuit denied standing to Imperial County. During oral argument, the panel questioned whether a deputy clerk with independent responsibilities and supervised by a separate part of the California government could, without the actual Clerk of Imperial County, even represent the county, let alone the entire state. It looks as if the Ninth Circuit was unwilling to grant a low guy on the totem poll the right to step in where the chain of authority was tenuous at best. So, this first decision is a victory of marriage equality. Imperial County had wanted to defend Prop 8 in federal court and now, it cannot. And, while the deputy clerk could appeal, it is unlikely that this denial of standing will be overturned.

The second order is a little more complicated. It was not a final decision on standing like the order denying standing to Imperial County. Instead, the Ninth Circuit looked at the law and said, "We just don't know." A recent similar case out of Arizona holds that the right of initiative proponents — ordinary citizens in their capacity as organizers of a ballot measure — to defend their law when the state government refuses to do so hinges on state law. That is, the Prop 8 proponents' standing to defend Prop 8 going forward depends on what California law has to say about their rights.

But, the Ninth Circuit, a federal court, is not an expert on state law. So, when a question before a federal appellate court hinges on getting a clear answer to a question of state law — in this case, does California law allow ballot proponents to step in the shoes of the state to defend their measure in court when the state declines to do so? — the federal court asks the state supreme court, the final arbiter on state law questions, to give them an answer.

It would be like me asking my friend Jonathan, an economist, to teach me about the economic ramifications of repealing the estate tax, so I can use his expertise to help me make my legal or constitutional argument. He's the economic expert; I'm the legal expert. It makes sense that I would ask his advice. Here, the California Supreme Court is the expert on all things state law, and since the proponents' standing depends on state law, the Ninth Circuit asks its colleagues in California to tell them what to do.

This means a few things. First, we have no decision yet on the proponents' standing. Second, the Ninth Circuit is going to do whatever the California Supreme Court tells it to do because the California court is the final arbiter on what its state law is. Third, this intermediate step further delays any final decision. While certified questions are usually expedited, there is no telling how many weeks this adds to the process. The court could ask for briefing on the question, but that — and the timeline — is up to the court.

But, this is not a bad development. Since state courts have the final say on state law questions, and the standing question hinges on state law, had the Ninth Circuit issued a decision without asking for advice from the experts, its decision would be more ripe for appeal. This intermediate step ensures that the Ninth Circuit gets it right.

View the Order Certifying a Question to the California Supreme Court, AFTER THE JUMP…