The NYT reports on Census data that show "child rearing among same-sex couples is more common in the South than in any other region of the country." 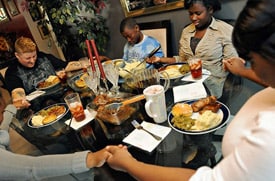 Gay couples in Southern states like Arkansas, Louisiana, Mississippi and Texas are more likely to be raising children than their counterparts on the West Coast, in New York and in New England.

The pattern, identified by Mr. Gates, is also notable because the families in this region defy the stereotype of a mainstream gay America that is white, affluent, urban and living in the Northeast or on the West Coast.

Theories on the pattern?

A large number of gay couples, possibly a majority, entered into their current relationship after first having children with partners in heterosexual relationships, Mr. Gates said. That seemed to be the case for many blacks and Latinos in Jacksonville, for whom church disapproval weighed heavily.

“People grew up in church, so a lot of us lived in shame,” said Darlene Maffett, 43, a Jacksonville resident, who had two children in eight years of marriage before coming out in 2002. “What did we do? We wandered around lost. We married men, and then couldn’t understand why every night we had a headache.”

More at the NYT…

Previous Post: « Watch: Michelangelo Signorile Spars with a Palin Supporter
Next Post: Schwarzenegger’s Mom Took Him to the Doctor Because She Thought He Was Gay »