Chief Justice of the Iowa Supreme Court Mark Cady has agreed to meet with bigot Chuck Hurley, one of the most vocal critics of Iowa's introduction of marriage equality. Hurley, head of a new conservative group called The FAMiLY, says that he will take the opportunity to ask Cady to “pray and search his heart” and step down from the bench. 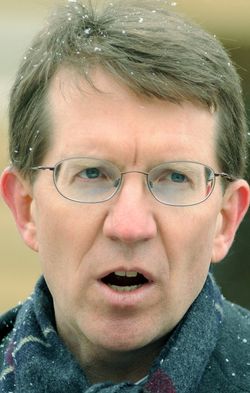 “This court thinks they’re smarter than nature,” Hurley says. “…In the opinion, the justices said that they’re holding the constitution up to an evolving standard and our view is that some things, like marriage, are transcendent.” Hurley says the judiciary needs to be “subordinate” to not only the other branches of government and to the people, but to the laws of nature. ”Sodomy was called a crime against nature for centuries,” Hurley says.

While Hurley plans to ask the chief justice to resign — and to convince the three other justices to follow him off the court — Hurley doesn’t expect the meeting to be confrontational. ”And as far as getting into hateful personality, casting aspersions, that’s not who I am and I don’t think that’s who Mark Cady is,” Hurley says.

Hurley, who is a lawyer, says impeachment is a “big deal” that requires serious contemplation, so The FAMily Leader organization isn’t ready to endorse impeaching the four justices who remain on the court. “They could help heal this state quickly and resolve this issue,” Hurley says, “and orderly resign over time.”

Cady revealed on Friday that he has no regrets about voting for marriage equality.