An appeals court today threw a huge wrench into Rahm Emanuel's candidacy for mayor of Chicago. 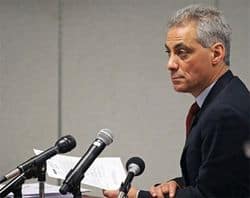 "An appellate panel ruled 2-1 that Emanuel did not meet the residency standard to run for mayor. Appellate judges Thomas Hoffman and Shelvin Louise Marie Hall ruled against Emanuel. Justice Bertina Lampkin voted in favor of keeping President Obama’s former chief of staff on the Feb. 22 ballot. 'It’s a surprise,' said Kevin Forde, the attorney who argued on Emanuel’s behalf. Emanuel’s attorney’s are expected to use Lampkin’s dissenting opinion to appeal the case to the Illinois Supreme Court.

Wrote Hoffman: “We … order that the candidate’s name be excluded (or if, necessary, be removed) from the ballot from Chicago’s Feb. 22, 2011.”