Michael Petrelis notes a recent Fortune magazine profile of Chief Justice John Roberts in which his lesbian cousin is interviewed: 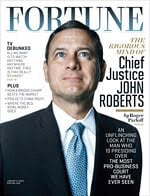 Roberts is also likely to vote like a conservative if the Court eventually hears the constitutional showdown that Goldstein considers "possibly the case of the century": the challenge to the constitutionality of California's Proposition 8, the 2008 ballot initiative forbidding gay marriage.

Numerous gay-rights cases are now working their way through the lower courts, challenging, for instance, the federal Defense of Marriage Act (which says that if gay marriage is allowed in one state, other states and the federal government need not recognize those marriages) and state laws restricting gay adoption. The Prop 8 case will be the toughest case for the gay-rights side to win, Goldstein explains, because it asks the Court to do the most: Strike down a definition of marriage that has prevailed for most of the country's history and that is still used in all but a handful of states.

"On the one hand," says Goldstein, "is the Supreme Court going to get out in front, when the right hasn't yet been extended by many states? On the other hand, you could say, is the Supreme Court going to have this as its legacy — something where 25 years, 50 years, 75 years later, we'll look back and say, How could we have been so mindless in our hatred? What do you want history books to say?"

At Roberts' confirmation hearings, one of the members of his family that he introduced to the Senators was a cousin named Jean Podrasky.

"I don't know John that well," says Podrasky, 46, in an interview with Fortune, "but he's always been very kind to our family." Roberts gave her a personal tour of the White House as a high school graduation present, she remembers.

Podrasky is gay, as Roberts knows, she says. She lives in San Francisco with her longtime girlfriend. Would she like to be able to get married someday?

Has she ever discussed —

"I really would never disrespect him by asking him about his cases," Podrasky says, interrupting.

Most Supreme Court advocates focus on Justice Kennedy as the likely pivotal vote in the gay-rights cases. But might Roberts also be persuaded to rule that homosexuals have the same right to get married that heterosexuals do?

"No," Goldstein says. "The Chief Justice can say, 'I certainly don't agree with this differential treatment, but this is a social institution that has existed throughout the nation's history, and I'm not going to go so far as to invalidate it.'"

We can also hope that Roberts might draw on his own family's situations when thinking about marriage cases.