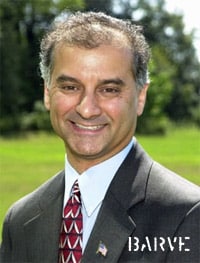 A dozen lawmakers from the Maryland House and Senate formally kicked off their push for gay marriage this afternoon using sweeping comparisons to the civil rights battles and generational shifts in attitude.

House freshman Keiffer Mitchell from Baltimore said "years from now children will ask where you were" on the issue. "History will record where we stood." He held up a pen used by Gov. Spiro Agnew to sign the law allowing interracial marriage, and said he hopes to have a similar stylus from Gov. Martin O'Malley this year if gay marriage passes.

House Majority Leader Kumar Barve said the bill "goes to the very core of what it means to be an American." He also reference the next generation. "Twenty years from now I look forward to the day when young people will say 'What was the big deal?'"

And a new Gonzalez poll shows the public favors it:

"In the poll, 51 percent of voters say they would favor a law in Maryland allowing same-sex couples to marry, while 44 percent opposed such a law and 5 percent gave no response."

As Steve noted over the weekend, however, anti-equality group Protect Marriage Maryland has its website and campaign ready to go should such a bill be passed.