Via Pam Spaulding comes this bit from a California Lawyer interview with Supreme Court Justice Antonin Scalia asserting that women and gay people don't have constitutional protection against discrimination. 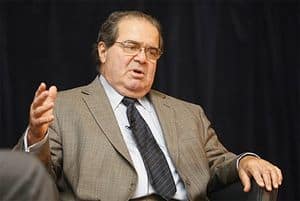 In 1868, when the 39th Congress was debating and ultimately proposing the 14th Amendment, I don't think anybody would have thought that equal protection applied to sex discrimination, or certainly not to sexual orientation. So does that mean that we've gone off in error by applying the 14th Amendment to both?

Yes, yes. Sorry, to tell you that. … But, you know, if indeed the current society has come to different views, that's fine. You do not need the Constitution to reflect the wishes of the current society. Certainly the Constitution does not require discrimination on the basis of sex. The only issue is whether it prohibits it. It doesn't. Nobody ever thought that that's what it meant. Nobody ever voted for that. If the current society wants to outlaw discrimination by sex, hey we have things called legislatures, and they enact things called laws. You don't need a constitution to keep things up-to-date. All you need is a legislature and a ballot box. You don't like the death penalty anymore, that's fine. You want a right to abortion? There's nothing in the Constitution about that. But that doesn't mean you cannot prohibit it. Persuade your fellow citizens it's a good idea and pass a law. That's what democracy is all about. It's not about nine superannuated judges who have been there too long, imposing these demands on society.

What do you do when the original meaning of a constitutional provision is either in doubt or is unknown?

I do not pretend that originalism is perfect. There are some questions you have no easy answer to, and you have to take your best shot. … We don't have the answer to everything, but by God we have an answer to a lot of stuff … especially the most controversial: whether the death penalty is unconstitutional, whether there's a constitutional right to abortion, to suicide, and I could go on. All the most controversial stuff. … I don't even have to read the briefs, for Pete's sake.

"In these comments, Justice Scalia says if Congress wants to protect laws that prohibit sex discrimination, that's up to them. But what if they want to pass laws that discriminate? Then he says that there's nothing the court will do to protect women from government-sanctioned discrimination against them. And that's a pretty shocking position to take in 2011. It's especially shocking in light of the decades of precedents and the numbers of justices who have agreed that there is protection in the 14th Amendment against sex discrimination, and struck down many, many laws in many, many areas on the basis of that protection."