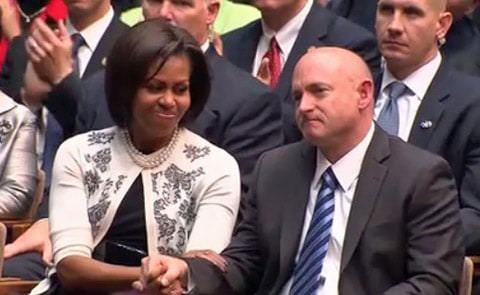 Certainly the most moving (unscripted) moment of last night's ceremony.

Senator Kirsten Gillibrand came back aboard Air Force One following the ceremony (Gillibrand, Debbie Wasserman-Schulz, and Nancy Pelosi were in Giffords hospital room when she opened her eyes) and told the press gathered there:

“We were telling her how proud we were of her and how she was inspiring the whole nation with her courage and with her strength,” Senator Gillibrand said. “Then Debbie and I started joking about all the things we were going to do when she got better. We were holding her hand, and she was responding to our hand holding, she was rubbing her hands and she was gripping our hands so we could … we knew she could hear and understand what we were saying, she moved her leg. we knew she was responding.”

And then, Sen. Gillibrand said, one of Ms. Giffords’s eyes started to twitch. (Her other eye was bandaged because it was damaged in the gunfire).

“Her eye is flickering and Mark sees this and gets extremely excited,” Sen. Gillibrand said. “He said ‘Gabby open your eyes, open your eyes,’ — he is really urging her forward, and the doctor is perking up.”

Sen. Gillibrand said that around 30 seconds later, “she finally opens her eyes, and you could tell she was desperately trying to focus.”

She described Mr. Kelly as “so happy,” and said that she and others in the room were crying.

“Mark says ‘if you can see me, give us the thumbs up,’” Sen. Gillibrand said. And instead of giving a thumbs up, Ms. Giffords raised her whole arm, and later reached out to touch her husband’s ring.

Wasserman-Schultz compared the moment to the birth of her children.

Previous Post: « Watch: Obama Speaks at Memorial Service in Tucson
Next Post: Watch: Gay Giffords Intern Daniel Hernandez – ‘I Must Humbly Reject the Use of of the Word Hero’ »