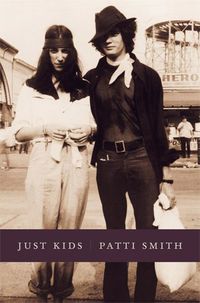 I thought I'd put this question out there partly for selfish reasons. I finished Patti Smith's Just Kids over the holidays and am looking for my next book. I like switching between fiction and non- but sometimes stick in the same area for a while.

I also thought it might interest folks to hear what their fellow Towleroad readers are reading.

I thought Just Kids was a really fascinating picture of New York City in the late 60's and early 70's and it's really interesting to see NYC places that have undergone change through Smith's eyes. For instance, a loft she and Mapplethorpe lived in over what was once the Oasis Bar on 23rd street is now a nail salon over a place called Jake's Saloon. West 23rd street (along with the Chelsea Hotel) is practically its own character. Smith's memories of Mapplethorpe are also incredibly poignant. It's also a book to be read by anyone who is a struggling artist.

So, what book are you reading, or what have you just finished? Give us a brief summary and let us know if you like(d) it or not.