The California Supreme Court announced today that it will accept (and answer) the certified question from the Ninth Circuit about whether state law gives the Prop 8 proponents — Protect Marriage dot com — the right to defend the law in federal court. The Court has outlined a fast-track schedule — briefing done by May, oral argument by September and a decision one to two months later. Throughout this time, the federal case is technically on hold and the stay that prevents same-sex couples from marrying in California will remain in effect. 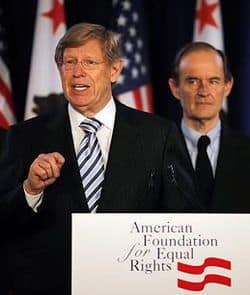 If you recall, the Prop 8 case came to the 9th Circuit with two issues: (1) whether the Prop 8 proponents had standing to appeal Judge Vaughn Walker's ruling striking down Prop 8, and (2) whether Judge Walker was right to do so. After oral argument, the three-judge panel declined to pass judgment on either issue and instead certified a question to the California Supreme Court about what California law has to say about initiative proponents' rights to defend the law when the state declines to do so.

Two cases — Karcher v. May (1987) and Arizonans for Official English v. Arizona (1997) — address when people other than the state attorney general or governor may represent the state on appeal. Karcher dealt with state legislators — President of the NJ Senate and Speaker of the NJ House — who wanted to defend a school prayer statute despite the governor's refusal. In the course of the appeal, the legislators lost their elections, their party lost their majority and they were replaced by legislators who did not want to defend the law either. The now-former legislators sought to continue to fill the shoes of the state. The Supreme Court said no. Per state law, the legislators could only have intervened in the first place because, as President of the Senate and Speaker of the House, they were official representatives of the state and, by virtue of their lost election, they were now ordinary citizens with no official connection to the legislature or the underlying law.

In Arizonans, the governor and attorney general declined to defend a law created by citizen initiative. The Ninth Circuit held that proponents had standing to appeal a decision striking down the measure, but when the Supreme Court decided to vacate that opinion on other grounds, Justice Ginsberg, writing for the entire court, expressed “grave doubts” about proponents’ standing. In Karcher, the Court said it had “recognized that state legislators have standing to contest a decision holding a state statute unconstitutional if state law authorizes legislators to represent the State’s interests,” but in Arizonans, it was “aware of no Arizona law appointing initiative sponsors as agents of the people of Arizona to defend, in lieu of public officials, the constitutionality of initiatives made law of the State.”

So, the issue in the certified question to the California Supreme Court in the Prop 8 case is whether California law allows initiative proponents to be considered "agents of the people" and able to defend Prop 8 on appeal.

Ted Olson and David Boies argued that the 9th Circuit need not certify the question because regardless of what state law has to say, standing in a federal court is a matter of federal law. If the Prop 8 proponents cannot identify a real or "particularized injury," regardless of whether California law anoints them agents of the people, there can be no standing to appeal Judge Vaughn Walker's original ruling striking down Prop 8.

I agree with Mssrs. Olson and Boies and a plethora of constitutional scholars. Having spent a number of years arguing standing on appeal — usually to keep lower court plaintiffs out of court — I have always argued that standing in federal court is incumbent upon the petitioning party experiencing real and particularized injury as a result of the adverse lower court ruling. In this context, experiencing an "injury" means being harmed in some way or being ordered to do something. It's easy if a party is ordered to pay $10 million for breach of contract or if a party is being sent to jail for committing a crime. Those are real and particularized injuries. But, it is not clear what real injury Protect Marriage dot come felt when Judge Walker ordered the State of California to open up marriage rights to same-sex couples. And, the State doing something you don't like does not count as real injury.

In any event, even if Protect Marriage dot com believes that it was harmed by Judge Walker's ruling, the fact remains that standing in a federal appeal is a matter of federal law — "real, particularized injury." That would make California law about initiative proponents' rights a necessary, but not sufficient, element for standing. It is necessary to the extent that dicta Arizonans suggests that state law could deny initiative proponents the right to step into the attorney general's shoes, but it is not sufficient in that they would still have to satisfy the particularized injury requirements for standing.

It is possible, however, that Arizonans represents a separate standing structure for citizen initiatives under the theory that the people who organized initiatives or referenda need not show direct injury or that the mere fact that the law they created was overturned is injury enough. I think that is a gross bastardization of standing principles and one that is unlikely to be accepted by an increasingly conservative federal judiciary. It is a bastardization because it is a long-settled rule that average citizens or taxpayers do not have standing to challenge laws they do not like. Plus, conservative legal scholars have been restricting standing principles — which were used liberally to permit challenges to antiquated or oppressive laws during the Warren Court — since the 1970s, so to accept a liberal standing rule in cases simply because the underlying law comes from the initiative process would be to elevate initiatives above other duly enacted laws for no apparent reason.

Nevertheless, that the question was certified and that the California Supreme Court is answering it is probably a good thing. At a minimum, Arizonans suggests that state law is relevant to initiative proponents' standing. Had the 9th Circuit considered the question without asking for California's help, the court would be risking a remand from the U.S. Supreme Court.

What happens now? The California Supreme Court portion of this case will continue through the rest of 2011, with briefing, oral argument and a decision scheduled for April/May, September and December/January 2012, respectively. During this time, marriage equality is on hold.

We are reminded: Patience is a virtue.