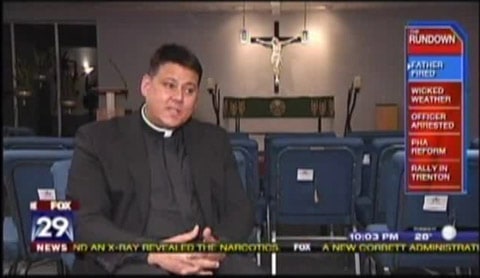 Students are angry after Chestnut Hill College, a Roman Catholic college in Philadelphia, fired a professor because he's gay, although Father James St. George has never hidden that fact and was completely vetted before joining the college.

St. George believes it's because the college received a letter from James Pepper, a local lawyer with no ties to the college, branding him a "heretic".

Father St. George is part of the Old Catholic Church Of The Americas, a faction that broke away from the Vatican back in 1870. In his church, priests are allowed to marry and be gay.

A quick Google search when the college hired him would have revealed that, but the college said in a statement, "it was with great disappointment when we learned through St. George's public statements of his involvement in a gay relationship with another man for the past 15 years."

The college never spoke to Father St. George, he says, they sent a letter, and then refused to take his calls.

Said St. George: "I serve as a trauma chaplain, I help broken people. I run a parish, a small parish in Blue Bell, take care of people who have no hope. I teach kids how to become better adults."