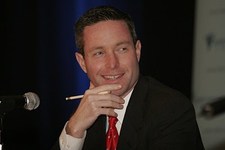 Pundits on the left and right alike claim inclusion of gay group GOProud at this year's Conservative Action Political Conference represents a defining moment for the right wing gathering.

Those who support GOProud's inclusion suggest the group can help bring LGBT into the conservative fold, while opponents, including heavy-weights like Focus on the Family's Family Research Council's Tony Perkins and Eagle Forum founder Phyllis Schlafly, describe GOProud's attendance as being "incompatibile" with conservatism's true mission.

But looking over the schedule of events for CPAC, which begins today with a speech by Rep. Michele Bachmann, it's clear that divisive anti-gay politics are still at the top of the conference's agenda: today, at 2:30PM, homophobic Bishop Harry Jackson and Tom Minnery, the head of Focus on the Family's political advocacy group, will participate in a seminar called "Traditional Marriage and Society."

Considering Jackson tried, and failed, to fight D.C.'s marriage equality law all the way to the Supreme Court, one can be pretty sure he won't be espousing the virtues of LGBT families and love.

Chris Barron, chairman of GOProud's board, has been downplaying the protests surrounding his group, and recently remarked, "The truth is that it's five boycotters and 10,000 people who are attending the conference, so we're celebrating the 10,000 people and not the five who are boycotting."

He continued, "It would be a little like us announcing we were boycotting the DNC, even though we never participating in it. Most of the organizations speaking out weren't CPAC sponsors last year, so who the hell cares if they're boycotting, quite frankly?"

Barron may be more right than he knows, because these protests appear to be nothing than public posturing, while in private conservatives are still dedicated to erecting policies of exclusion.