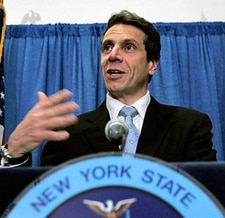 New York state's gay and lesbian population may have something to look forward to, because Gov. Andrew Cuomo insisted yesterday he will indeed ask lawmakers to vote on marriage equality this session.

"We’ll be working very hard to pass it,” said Cuomo during an appearance of Hofstra University, according to the New York Times.

Cuomo has long supported marriage rights, but such legislation doesn't always go over well in the Empire State, where it often passes the State Assembly and then fails in the Senate, as happened in 2009.

Though the Senate's Republican majority leader Dean G. Skelos remains opposed to gay marriage in the Empire State, an aide said he will not hinder a vote, but also insisted the state's GOP wants to focus on economic issues.

If that's the case, perhaps they should look at the Williams Institute report released yesterday, which concludes same-sex marriage in Rhode Island would pump $1.2 million into the state's economy over three years.

No, it's not a massive amount of money, but state lawmakers with budget crunches can't afford to turn away any nickle, dime or gay dollar.