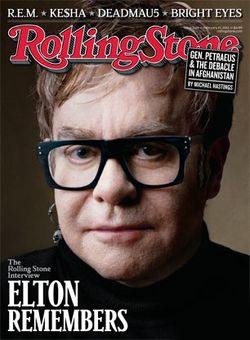 In a new interview with Rolling Stone:

"'I could not believe when I was asked to play,' he says. 'I thought it was a joke. I had dialogue with him before and he said, 'I'm not anti-gay, I want you to come, bring David.' My goal is for Rush to say, 'I support civil partnerships,' and if I rang him right now, I think he might agree. He was one of the first people to congratulate us on the baby.'"

Sounds like he's still trying to convert Limbaugh. You may recall that just last year John said something very similar to The Telegraph: "I got on with him very well, got on very well with his wife. I don’t have the same politics, but that doesn’t really matter. And I think this year I can start to put things in motion by trying to get him on my side."