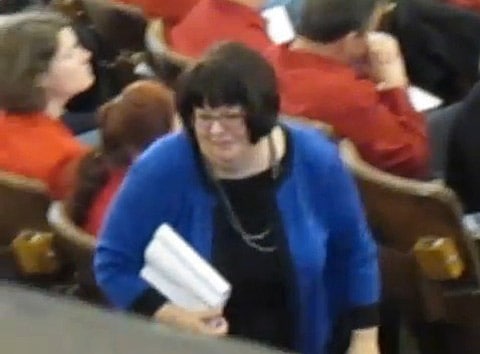 As you can see she's vastly outnumbered in a sea of red-wearing marriage equality supporters.

Check out a clip of the huge turnout, AFTER THE JUMP…

The New Hampshire House Judiciary Committee yesterday held hearings on two bills that would repeal the state's marriage equality law. The lawmakers made it clear that the bills would not be addressed until next year (and would be revisited at that time as well) so the legislature could address fiscal issues.

"Neither Rep. Leo Pepino, R-Manchester, nor David Bates, R-Windham, spoke in detail in support of their bills, though Bates argued briefly that the gay marriage law was passed without the consent of the people.

"I also want to make it very clear that next year, this legislation will be a priority," he said.

Nearly 600 people signed up to testify at the hearing, the vast majority of them opposed to repealing the law. Many urged lawmakers to put the issue to rest this session.

Watch Maggie (and her best friend) rail against same-sex marriage, AFTER THE JUMP…

And here are all the marriage equality supporters, waiting for the hearing: