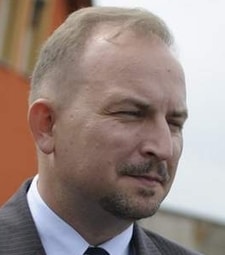 Asked about the policy by a local news station this week, Wegrzyn replied, "We can forget about gay men, but I would gladly watch lesbians."

He went on, "Human nature, human beings are made in such a way that we should live in a partnership according to nature. If somebody wants to live differently, that's his problem but he should not flaunt it.”

Wegrzyn apologized following a wave of outrage from women's and gay groups, and insists it was all a "joke."

I am sorry if this joke insulted anybody because it really could have sounded sexist. That was not my intention. My views on relationships between two people are unchanging and conservative but this does not mean I am a homophobe or discriminate against anybody. I oppose discrimination against anybody on grounds of sexual orientation.

His colleagues weren't laughing, though. Tomasz Tomczykiewicz from the Civic Platform party said they'll fine him an unspecified amount for the "silly" and "irresponsible" remarks.

If Wegrzyn's looking for more friends, though, perhaps he can hook up with former Colorado Lt. Sheriff Jeff Egnor. They have about the same sense of humor.