Gay Republican presidential hopeful Fred Karger has filed a complaint with the Federal Election Commission over his exclusion from a candidates forum in Iowa, the AP reports. Karger says he has been excluded because of his sexuality: 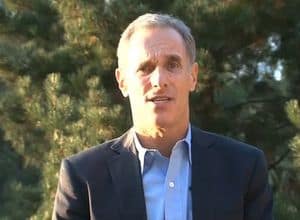 "The party of Abraham Lincoln should be inclusive and welcome all to discuss the important issues of today," said Karger, who is openly gay. "As someone who has been actively involved in Republican politics my entire life and worked on nine presidential campaigns, including three as senior consultant to Presidents Gerald Ford, George H.W. Bush and Ronald Reagan I feel I deserve a seat at the table."

In his complaint mailed to the FEC on Thursday, Karger argues the coalition is in effect endorsing the 15 potential presidential candidates it did invite. The forum is scheduled for March 7 at Point of Grace Church in Waukee.

It's not the first time Scheffler has opposed Karger. Back in May 2010, Scheffler sent Karger an email threatening to sink his campaign because he's gay.

Said the email: "You don’t care about transparency–you and the radical homosexual community want to harass supporters of REAL marriage. I am the Republican National Committeeman for Iowa. As a private citizen and knowing literally thousands of caucus goers, I will work overtime to help ensure that your political aspirations are aborted right here in Iowa. Have you studied our past caucuses–you have NO chance here in Iowa!"