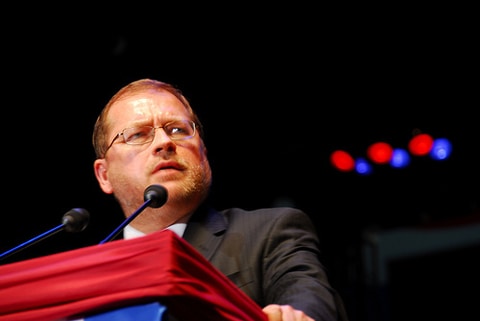 Anti-Tax activist Grover Norquist, who’s also a member of gay conservative group GOProud’s board, told CPAC attendees today that their left-wing opponents are made up of “takers” who want nothing more than to drain government and private funds for their own purposes.

“The left believes the proper role of government is taking things from some people and giving it to other people,” said Norquist, before deriding the “two wings” of the left’s dependency movement: those who are dependent, and the lawyers, labor unions and others who help keep them dependent by “making sure none of them get jobs and become Republicans.”

Norquist went on to say that the left is “not made up of friends and allies,” but rather they are “made up of competing parasites” who will devour one another if the right can successfully curb President Obama’s tax and spend policies. “If we say no to tax increases, stop throwing money [at them], they will cheerfully gnaw at the guy sitting next to them as on a taxpayer,” he said.

The right, he claims, is the “leave us alone” coalition who doesn’t want to run other people’s lives. Unless it comes to dictating marriage rights. Then it’s a free-for-all!

Give the speech a view, AFTER THE JUMP…