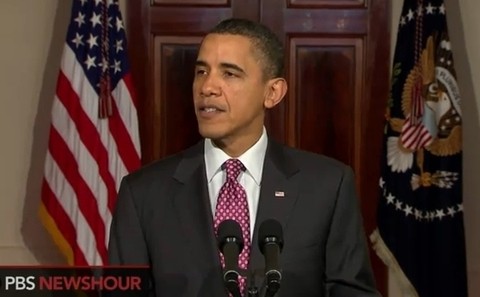 Speaking to the American people and the world today, President Barack Obama said that Egypt “will never be the same” after the successful revolution to oust Hosni Mubarak as President.

In his speech, whcih praised the Egyptian military for their role in the process, Obama specifically celebrated the non-violent Egyptian youth who helped spark the protests.

“Egyptians have inspired us, and they’ve done so by putting the lie to the idea that justice is best gained by violence,” he said “For Egypt, it was the moral force of nonviolence, not terrorism, not mindless killing, but nonviolence, moral force, that bent the arc of history toward justice once more.”

The president went on to quote Martin Luther King Jr.’s famous saying, “there is something in the soul that cries out for freedom,” before insisting, “those were the cries that came from Tahrir Square, and the entire world has taken note.”

Obama also pointed out that the word “Tahrir,” as in Cairo’s Tahrir Square, the epicenter of Egypt’s nationwide protests, means liberation, and contended, “it is a word that speaks to that something in our souls that cries out for freedom, and forevermore it will remind us of the Egyptian people: of what they did, of the things that they stood for, how they changed their country and in doing so changed the world.”

Watch Obama speech, AFTER THE JUMP…