A coalition of celebrities and public figures has penned a letter in conjunction with Freedom to Marry calling on President Obama to support marriage equality, as part of a new Say "I Do" Mr. President campaign.

Like so many Americans, you have spoken of your personal journey toward support for the freedom to marry. You have talked about the gay and lesbian people in your life, their commitment to each other and care for their kids, and their families that aren’t so different from any other family.

We ask you now for your leadership on ending the exclusion of same-sex couples from marriage, an exclusion that harms millions of Americans each day. Whether to end discrimination in marriage is a question America has faced before, and faces again today. With so many Americans talking it through in heartfelt conversations, it is a question that calls for clarity from the President.

You can offer hope to millions of young gay and lesbian Americans who are facing discrimination. You can tell them that their future is bright, that they, too, will be able to grow up and marry the person that they love, that the pursuit of happiness truly belongs to all of us. You can put government on the side of those seeking to care for their loved ones, instead of those standing in their way. You can affirm that for all of us, gay or non-gay, love is love and commitment counts – and that we Americans should treat others as we all want to be treated. 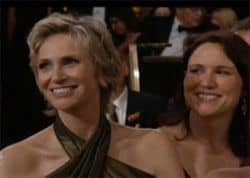 Said Lynch to the L.A. Times: "My wife and I were married in May of 2010, and I can say without a doubt that marriage matters."