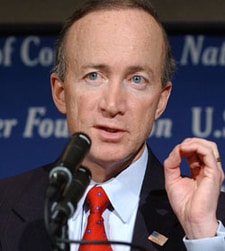 Indiana Gov. Mitch Daniels caused a bit of a stir among his Republican peers when he suggested last year that the GOP call a "truce" on social issues and instead focus on the economy.

"[The next president] would have to call a truce on the so-called social issues," said Daniels in an interview with The Weekly Standard. "We’re going to just have to agree to get along for a little while,” until the economy recovers.

Social conservatives balked at the time, but Daniels, a potential 2012 contender, may have been on the right track, because a poll put out by the Wall Street Journal and NBC shows that the majority of Republicans would rather their elected officials mind money, not people's sex lives.

65% of GOP primary voters said they would be more likely to vote for a Republican who focuses MORE on fiscal issues and LESS on social issues, while just 8% said they’d be less likely. And get this: Among evangelicals, the split was nearly identical, 65%-14%.

While this reads like good news, let's not forget that the economy dominated last year's midterm elections, yet the emboldened GOP has been launching anti-gay initiatives from coast-to-coast.

Still, when this poll's coupled with the number of people now supporting marriage equality, we see a general trend among Americans: they've got enough on their plate that they don't need to be worrying about archaic culture wars.