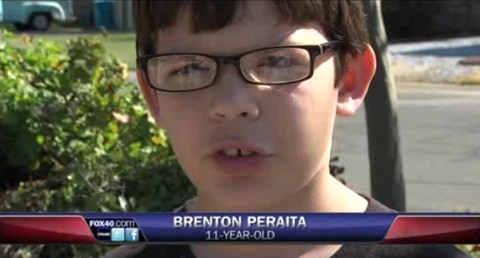 An 11-year-old in Yuba City, California was arrested by police at his school after he mentioned a gun while expressing anger about anti-gay bullying he had been enduring for months, FOX 40 reports:

Police arrested Brenton for making criminal threats after he said he wished he had a gun to get rid of some other students- students that, he says, had been bullying and abusing him.

"His reward for standing up for himself and saying, 'I'm no longer going to be the victim,' was a ride to the police department and a mug shot," said Jose Peraita, Brenton's father. Brenton was also finger printed, and issued a citation.

"They called me names and stuff," Brenton said. "They called me 'Brentina,' and 'homo,' and 'fag,'" he says. The Peraita's say bullies also broke Brenton's glasses. They say the problem has been ongoing for months, and they have gone to the school to complain 50 times. "We don't have a gun. That was the day he decided to stand-up for himself," Jose Peraita said. Police confirmed that no actual gun was located in the course of their investigation.

Watch the report and interview, AFTER THE JUMP…