Following news, and joy from binational same-sex couples and their advocates, that decisions regarding green card applications for such couples had been put on hold based on questions surrounding DOMA,  U.S. Citizenship and Immigration Services tempered hopes by saying the suspension could only last for a week or two. 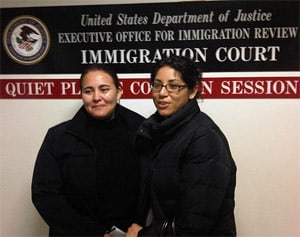 The NYT reports on confusion surrounding the announcements:

On Monday, Christopher S. Bentley, the chief spokesman for the immigration agency, confirmed in a statement that cases nationwide involving married gay couples had been suspended. What Mr. Bentley did not say was how long that hold might last and what issues the agency was seeking to clarify.

But on Tuesday, Mr. Bentley issued a new statement, saying that Citizenship and Immigration Services “has not implemented any change in policy and intends to follow the president’s directive to continue enforcing the law.”

Mr. Bentley said the agency’s field offices had suspended cases for a short period, perhaps a week or two, while lawyers clarified a “narrow legal issue” concerning the marriage act. He said the agency would probably resume action on same-sex marriage cases in coming days and would continue to deny immigration status to foreigners based on those marriages.

Advocates continue to warn couples that applying for green card status continues to place them at risk of deportation.