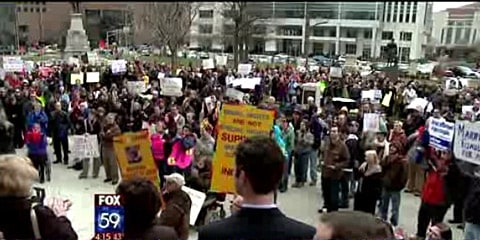 Pro-equality Indianans rallied Monday against a bill (HJR6) banning same-sex marriage which was passed earlier this year in Indiana. The bill's language, which says "a legal status identical or substantially similar to that of marriage for unmarried individuals shall not be valid or recognized," means that civil unions would not be recognized either.

It must pass another separately elected session of the legislature and a ballot referendum to be made law.

FOX59 reports: "The measure is now scheduled to go before the Senate Judiciary Committee on Wednesday, where it is expected to pass with a GOP majority."

Watch a report on the fired up rally, AFTER THE JUMP…