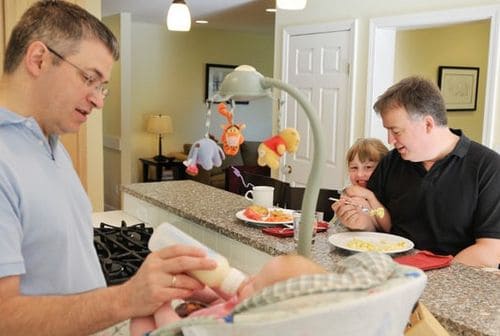 The AP today has published an article today about the powerful impact of openly gay lawmakers toward LGBT issues. According to the piece: "The gay lawmakers have impact in two important ways. Their speeches, often evoking personal themes, can sometimes sway wavering colleagues, and they can forge collegial relationships even with ideological foes through day-to-day professional and social interaction."

Included is an example of Further proving that people's minds can most certainly be changed simply by knowing someone who is gay.

"In 2009, New Hampshire's legislature became the first to legalize same-sex marriage without ever facing pressure from marriage-rights lawsuits. One of the emotional high points of that debate was a speech by Rep. David Pierce, a gay Democrat from Hanover who is raising two daughters with his partner. He described telling his oldest child, 5 at the time, that 'some people don't believe we should be a family.' Afterward, Pierce said, a fellow representative came over to say that the speech prompted him to change his vote in favor of same-sex marriage."

Pierce (right) and his partner Robert Duff (left) are pictured in the photo above (from a 2009 article in Valley News).

Watch Pierce's marriage equality speech from 2009, AFTER THE JUMP.