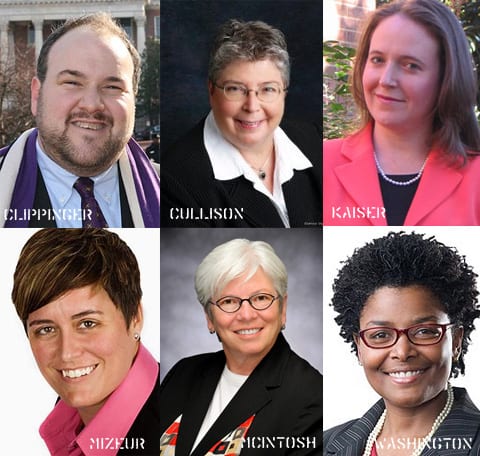 The letter from the six openly gay delegates says it is an attempt "to refocus this debate back to what this bill will actually do. Quite simply, it will secure for our families the protections that marriage – and only marriage – provides to loving and committed couples who have pledged to spend the rest of their lives together."

It will come as no surprise to any of you that this is a crucial week for the six of us. As you know, the House will soon consider the Civil Marriage Protection Act (Senate Bill 116), a bill that will allow same-sex couples to marry in Maryland. Importantly, it will also reaffirm religious communities' constitutional right to solemnize only those unions that fit within their faith traditions. First and foremost, we write to ask you – on behalf of our families and thousands of families headed by same-sex couples in our state – to vote yes on this legislation. Just as important, though, we are writing to refocus this debate back to what this bill will actually do. Quite simply, it will secure for our families the protections that marriage – and only marriage – provides to loving and committed couples who have pledged to spend the rest of their lives together.

The General Assembly will consider many other important bills and initiatives during this legislative session, but few will be as important to a group of Marylanders as the Civil Marriage Protection Act will be for the lesbian, gay, bisexual and transgender (LGBT) community. The estimated 15,600 families headed by same-sex couples in our state are remarkably similar to all other families. As anyone who attended the House or Senate hearing can attest, we come from all walks of life and reflect the great diversity for which Maryland is known. Same-sex couples live in every single one of Maryland's counties. Fully one-fifth of LGBT families include children under the age of 18. Our households are financially interdependent in ways that any couple in the state would recognize. We are proud to live in Maryland.

Our families need the same protections because we face many of the same challenges. We stretch our paychecks to put food on the table, keep a roof over our children's heads and plan for emergencies. We struggle with the skyrocketing costs of health care, college tuition, and gas for our cars. And though we shoulder many of these same responsibilities, we cannot count on the same kind of safety net should life throw more at us than we can handle.

Marriage is at its best and most effective during some of life's worst moments. The protections it affords to families are especially crucial when one's spouse is in the back of an ambulance, or rushed into emergency surgery, or dies unexpectedly. For us, as for all of Maryland's families, a marriage license will mean far more than the paper on which it is printed. For us, it means the possibility of shared health insurance, more stable homes for our children, and fewer conversations about legal documents with attorneys. We would never want the responsibility of voting on you and your spouse's will, power of attorney, or advanced medical directive, but you've been put in that position this week for our families. We have faith that when faced with the option, you will vote to allow same-sex couples the opportunity to fulfill the commitments of mutual support and shared responsibility that we have already made to one another and to our children.

You will hear arguments during the course of this debate that, in our opinion, distract from what this bill does and what our conversation should be about. On the one hand, some proponents of marriage equality will speak of the recognition and respect that marriage confers on a relationship. Though this is undoubtedly true, we cannot legislate what is, at its core, a matter of the heart. We certainly seek to be thought of as any other family, but what is more important – and what is actually at stake with this bill – is that we are treated as any other family by the state and its laws. And on the other hand, some opponents of marriage equality will change the subject and seek to debate "the definition of marriage." But not only does this bill not affect any couple already married in Maryland, reframing the debate abstractly distracts from the very tangible protections that we seek for our families.

There will also undoubtedly be a debate about whether the state could design some institution other than marriage. We believe that any attempt to create a separate set of rules for our families will be far more complicated than ending the exclusion of our families from marriage and inevitably lead to unequal treatment. In the decade since civil unions were first created, this belief has been borne out by experience. Before Vermont passed marriage equality legislation, their civil union law was explicitly limited to not include all the protections of marriage. And in New Jersey, despite the promise of equal treatment, many private employers have declined to offer health benefits to the civil union partners of their employees. Marriage equality is a far simpler and more powerful solution.

We understand that for many of you this will be a close call and a tough vote – personally, politically, or spiritually. We know that for many of you with LGBT family members and friends, it is an issue as personal as it is for us. For those of you who have committed to supporting the Civil Marriage Protection Act, we thank you and ask you to stand strong with us. For those of you who are not yet sure if you can support us, what we ask you for is the opportunity to talk face-to-face about the challenges our families face and how this legislation will help us meet them. What we ask is for the opportunity to protect our families as you would protect yours. Thousands of families headed by same-sex couples need your vote on this legislation. Colleagues, we need you. Please vote yes on Senate Bill 116, the Civil Marriage Protection Act. Vote yes because you know it is the right thing to do. Vote yes because you want to stand on the right side of history. Vote yes because every family in Maryland needs the protections that marriage provides.