Remember Pastor John Hagee? John McCain cut ties with him during the 2008 presidential campaign because of his extremist positions on gays 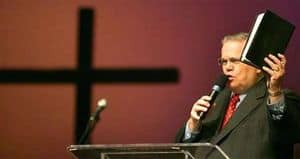 Hagee, you may recall, gave a sermon in 1990 that says Hitler was acting on God's behalf in "hunting" the Jews so that they might establish the state of Israel, and has made disparaging remarks about Catholics (for which he apologized) and has said that gay sin was responsible for Hurricane Katrina.

Hagee is back, Mother Jones reports:

Later this month, he'll host former House Speaker Newt Gingrich, a 2012 aspirant, at Cornerstone Church in San Antonio. For the candidate and the pastor, the summit is a chance for two controversial figures to help each other back into the spotlight—though a Hagee spokesman says the pastor has no plans to endorse Gingrich.

"Every so often [Hagee] pops up like a Whac-A-Mole and then goes away again," says Chris Korzen, executive director of Catholics United, who was part of the anti-Hagee choir three years ago. "Why does someone like Newt Gingrich feel like he has to have a public association with this person? Clearly it's about politics."