Talking Points Memo notes that statements by Rick Santorum to the Des Moines Register in a guest column which appeared over the weekend, indicate the potential presidential candidate has shifted in his views on gay sex 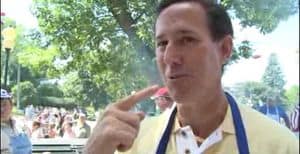 But at one point in the column, Santorum sought to make a distinction between gay people's private lives, versus the public sanction and recognition that comes with gay marriage:

Let me first define what we are not talking about. I believe if two adults of the same sex want to have a relationship that is their business. But when they ask society to give that relationship special recognition and privileges, then we should be able to have a rational debate about whether that is good public policy.

But hold on a second. Back when he was a senator, Santorum used to say that people's private sexual lives weren't just their own business.

In a famous interview with the Associated Press in April 2003, Santorum discussed the then-pending Supreme Court case of Lawrence v. Texas, in which the court was widely expected to (and ultimately did) overturn existing state laws against sodomy:

We have laws in states, like the one at the Supreme Court right now, that has sodomy laws and they were there for a purpose. Because, again, I would argue, they undermine the basic tenets of our society and the family.

TPM asked Santorum's political action committee for comment, but has of yet received no response.

In related news, still not changed: the definition of Santorum.